It has been a massive week of fully receiving my book out in the world. For various reasons I need to keep things short today. But I came across a cartoon recently, which I thought you’d love.

It perfectly encapsulates the stages we can call go on when we try to bring something into the world. And so I wanted to share.

And it speaks so much to the steps I faced within myself, as I embarked on the publishing phase of my journey with the book: 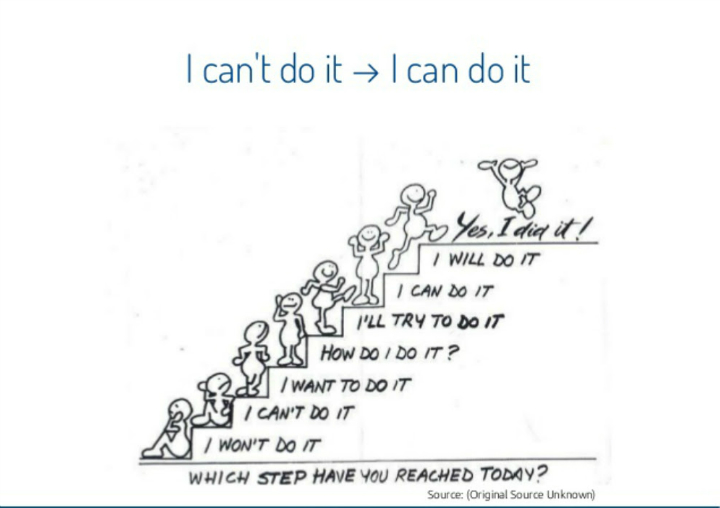 This kicked in for me the moment after I had a completed manuscript, took off my writer’s hat, and had to put on my “publisher’s” hat. Staring down the long tunnel of all I needed to learn, I felt my throat close off, my whole body contract, and a huge “NO” yell in my ear.

I mentally locked the manuscript in a drawer and wouldn’t even visualise it out in the world. As far as I was concerned I would not be doing what it took to publish. My deepest fears were shutting me down. “I won’t” was the perfect foil for me to never have to experience the world rejecting me or annihilating me for my bold expression and creation.

I sat there for weeks, my head in my hands. My bum went beyond numb and I wanted chocolate all the time.

But in the protective quietness of the cocoon that was “I won’t”, a space opened up for another internal voice to be heard. A tiny voice that eventually took me to the next step.

This voice was less petulant but still adamant.

It was at least a tad more honest than the first one. For in the ounce of truth that it contained, it suggested that I wanted to publish – I just couldn’t.

My “I can’t do it” was all about me believing I didn’t have what it took to publish the book – in terms of the technical skills and know how.

It was another layer of protection. As long as I said to myself “I can’t do it”, and sat on that step, I had a reason for not going forwards with the book. I could protect myself from the imagined pain of rejection and annihilation by the world.

But because I no longer had my “I won’t” and defiant head in my hands, I was at least more open to looking around me.

And as I looked around, I could see others who had done the journey and published. The more I saw examples of that, the more something started to quicken in me, and a new voice emerged.

I want to do it

It was true! The more I saw those who had done it, the more I heard within me that I wanted to do it too!

Suddenly I started daydreaming again about my book in the world.

In my heart, I loved my book. I wanted to see it be born just for the love of seeing it be born. On top of that, I believed it had a powerful message and was an incredible story, well told.

I wanted it to have life in the world.

The flames of desire rekindled, the “I want to do it” becoming the enlivening breath that had been needed to reignite embers from the creative fire that had written the book in the first place.

As the flames jumped higher, I sprang back to life, up onto my feet, turned around, and was fuelled to move off and up.

Although still scared about the journey ahead, I was excited too. Having finally told myself the truth that I wanted this book born, I decided I was not going back down to that bottom step ever again! The question therefore returned to “how do I do it?”

No sooner had I consulted my head for the answer I went into overwhelm and all my fearful beliefs about how and why it was not possible.

Before I knew it, I stumbled back down to the “I can’t do it” step.

It took a few days of sitting there to remember how I DID want this book born in the world. I immersed into the magic of that again, my imagination taking me to the world where my book already lived and existed and throbbed with life and love, enjoyed by those who read it.

And lo and behold, from within the vision itself of that book in the world, a voice rose up within me that allowed me to step up again, a voice that said…

I soon learned that whenever I enjoyed immersing in the magic of my vision of the book in the world, I no longer got in the way of myself.

The love of my book, and me being fully immersed in the vision of it in the world, enabled the rocket fuel of “how do I do it?” to get things going again in a practical way, and in a magical way.

The book never showed me a ten point game plan, or the fully lit runway – only the next obvious action step.

But it was my willingness to try, that paved the way for me to even allow that step to be given to me.

Pretty soon I no longer needed to stand on the “I’ll try to do it” step, and instead moved up to something even more powerful.

I can do it

As I took the first couple of action steps given to me by my book itself and the vision of it living in the world, I began to create momentum. I started to tell myself “I can do it!”

It was true! I could do it!

People crossed my path, doors opened up, opportunities came forth.

And I realised I didn’t have to do this birthing all by myself.

I will do it

By now all I knew was that YES, I will! This energy of conviction accompanied me in every conversation I had, in every social media post I posted.

The conviction of “I will do it” took me to one place and one place only. A joyous place indeed. The top step of “I DID IT”

So there you have it

← We have BOOK LAUNCH BLAST OFF – WOOHOOO!
I’ll meet you in the music →