I had a missing piece of a jigsaw fall into place yesterday afternoon. It can be powerful when that happens can’t it? When you get one of those aha moments where the lightbulb goes on, the dots join up…and you feel that quiet sense of completion.

I’d gone for a walk by the water, a place where I often have magic encounters or moments of profound insight.

You’d have loved it down there yesterday. The blue was spirited both above and below, a flick of breeze, a candy-popping glint from warm tangerine sun. The pelicans were in full-throttled arousal, bills clapping open and shut in a frenzy of low grunts and mating supremacy, their pouches as flushed and rippling as a salmon trying to get upstream. Further away it was a different story with twenty four black swans, synchronised swimmers making graceful shapes in a language known only to them.

It’s true, that was all very magical. But the magic I really want to share with you is with what happened next and what I came to realise and remember.

You see, I bumped into a Facebook friend – and as we walked and talked we said hi to a passerby, a woman with a mass of henna curls who was as happy to stop and chat as we were, and who lived in one of the houses along the way. Pretty soon the conversation turned to how stunning the trees were around us, in particular the beautiful stand of sheoaks between her house and the water.

Casually, I remarked that she must clearly be a steward for the trees if life had landed her in a house right among them…because, well, you know, life is like that – it moves us where we are needed most.

‘’That’s SO true, thank you for saying so! You know, I’ve even had to come out a few times and stop people putting copper nails into the trunks!”

I asked her what she meant by that, as it sounded so strange. She told me that people have come and tried to kill the trees by using the copper nails…and all so they can have a view out to the water. I had never heard of copper nails being able to kill these trees but I was deeply saddened and dumbfounded to learn of it.

As we looked across the inlet my new friend pointed out the tree stumps in the water near its edge. She told me how they used to be huge mangrove-like trees with large and beautiful canopies. But that they had been poisoned. By someone who wanted to secure views out to the water.

Suddenly the jigsaw puzzle came together for me – of why one of those stumps had always seemed to ‘’draw me’’ to it whenever I walked past.

I had always felt like there was something about it.

To me it always looked as if it was praying – sometimes I even saw a dog within it, praying.

And many times when I had approached it, I too had stooped down in a kind of reverent manner, to say hello and to thank it for being there. 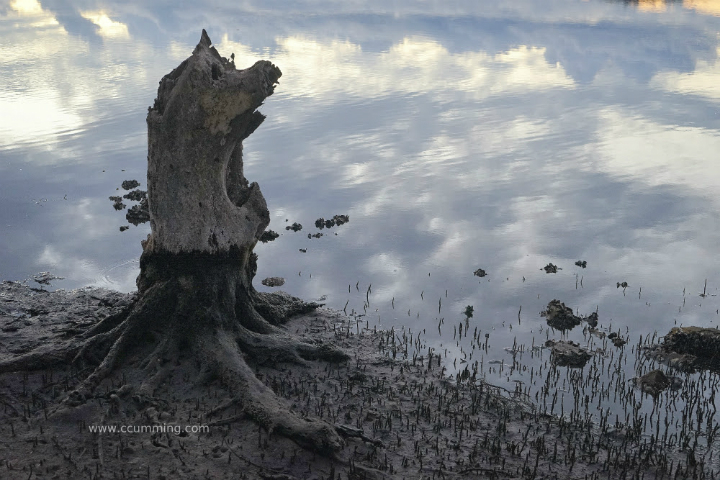 I had never quite fully understood why I had done that – but in that moment I got it.

I had done it because of its Dreaming.

Just like the aborigines have always said about any animal, person, plant, or rock that dies or is lost somehow from the physical world…its Dreaming continues.

This tree had long been killed. But its spirit lives on in the Dreamtime, its energy signature continues.

So it has been the Dreaming of this tree that has nudged me whenever I have walked past its dead stump – urging me to stop, to feel the sacred, to SEE and know it AS such.

I guess what I am saying here is that the Dreaming for this tree – or this dead stump – is just as alive and pulsing as the throats of those pelicans, the play of the breeze, and the grace of the swans. It’s canopy is as large as it ever was, maybe even more so, and it stands tall and proud just as it always did – before someone decided it was too tall, too large, too annoying…and poisoned it.

I kind of always knew all this in my heart, but it now felt like a deeper remembering.

Then I saw something else.

The position of the tree stump was such, that the face and praying hands that seemed to be within it were facing the healthy mangrove tree beside it.

As if to show me another reminder of how vital it is to revere what trees we have left. To look after them, preserve them, honour them. In the moment I had that thought, a heavy seed pod bounced off my head from the tree behind me, only to be followed by another.

The Dreaming lives on – sung alive whenever we remember its life, talk about it, bow down to honour it.

Yet more than ever, we must revere what is still here in the physical world.

In our own lives, we must look around and see what we can still do within our own sphere of influence…in our backyards, in our communities, in our hearts.

And in the meantime, in a week in which I saw the heartbreaking news that a species of rhinos have now officially become extinct, and a week in which I read how even more of our corals are bleaching beyond recognition, it is but a small comfort to my heart to know the Dreaming still lives on.

That’s all I wanted to share this week. xx