This week I want to share with you about that void we can sometimes feel when the old way of being is no longer an option for us or keeps us too limited – and when the new has announced itself and feels imminent, but we still don’t really know what it will be like to live it.

You know the space I’m talking about?

This week saw a potent day happen in astrological terms. We had a solar eclipse, it was a Super New Moon, and we entered into a brand new 19 year cycle. This is big stuff, and the activation potency of the eclipse is said to be with us until March 23rd.

A window of new heart and soul opportunity is opening up – for all of us.

Maybe you have already started to feel this?

I know I have been.

On that potent day, I was to sign an important three year contract concerning my creative work. I knew the details of the contract and the technical working arrangement. But I didn’t know how it was really going to FEEL to be in this new working relationship or how it will turn out.

All that was clear was that instead of making all the decisions by myself, a new period of collaboration was about to usher in – and I was standing in that space in-between…

Sometimes we might imagine the void to be black.

On that day it wasn’t like that for me. Rather, it was grey white and involved a string of strange little events…

At 5.30 that morning my husband’s alarm yanked me out of an intense healing dream that involved characters and scenes from my past. Disoriented, and with half of me still feeling left in dreamland, I got up and dressed so I could drive down to the beach for my daily walk there.

But at the entrance of the carpark, a man flagged me down and to my surprise told me I could not enter. Everything was rammed full, he said, and cordoned off for a national surf competition that was to last all week.

The whole time I had lived here, I’d always been able to park here for my morning walks!

There was nothing for it but to turn around, drive further down the road to the next surf club, and use their access path down to the beach.

As I got out of the car, I was sure I recognised the man leant up against the bonnet of his van and talking to his mate. So I asked him if he was indeed who I thought he was – only to hear that he wasn’t, even though to me he looked identical.

Somewhat thrown by this, I walked over to the spot where the access path to the beach should have been. I was stunned to discover it was no longer there. At first, I thought I was going mad and had got my locations mixed up. But no, this should have been the spot. A quick check soon revealed that the fence had simply been covered in a hessian mesh to stop people walking through. I had no idea why.

Still determined to get down onto the beach, I drove the car a kilometre or so more, to the farthest end. It was becoming difficult to see out of the windscreen, despite my attempts to flush it with water and the wipers. A sea fog was spreading across the whole suburb, breathing itself onto the glass. It was unusual for this time of year.

I got out and, for a few minutes, grounded myself. It was delicious being barefoot on a welcome mat of soft dewy grass! I gazed across to the water. 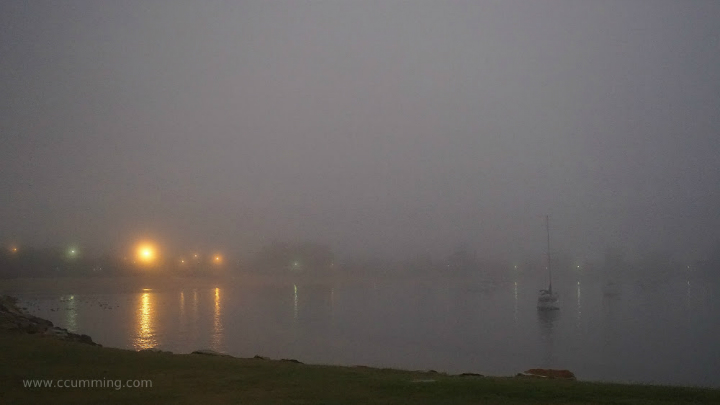 Two yachts ghosted on their mooring, watched by the glow of lights around the bay. A flash of silver fish flew en-masse out of the water and skimmed themselves like shining pebbles across its surface. For a few seconds the fish seemed to embrace both worlds of the familiar and the unfamiliar – and make light work of it too.

I began walking. By the time I landed on the beach, the moist and misty fog of a 360 degree whiteout was almost complete. The water was warm on my feet, and the salty pong of seaweed wrapped around the humidity. I considered the morning so far.

Nothing was as it normally was.

I was starting in a new place, facing a new direction.

Only able to see a few paces in front of me.

It was the perfect metaphor for the situation I found myself in life – where the familiar was now overlaid with the unfamiliar, the way forward somewhat shrouded in mystery, and where the warm breath of nervousness and excitement about entering into a three year collaboration and commitment, had fogged the screen of my mind for a short while.

As I walked, the soaked sand giving a little under my feet, I knew I could only see as far ahead as I needed to right now: a few paces. It was enough.

And I remembered something else too.

What remains important as we step into the unfamiliar phases of our familiar world is to keep the heart open, even when we don’t have the whole picture of how it will all work out.

To befriend the void is to hang out with the magic and potential of what we can’t yet see.

It is to step the next step, fully immersed in the swirl of potentiality as it unfolds.

And to know that of course, in the end, all fog clears.

← opening to the gold that is…support
where is home? (And how to never lose it) →