A couple of mornings ago I was out walking by the water, listening to the wind singing the sheoaks alive as it whooshed on through.

When I looked up, it was to see another of the regular walkers coming towards me, a smiling muscular woman kitted out in black cap, black T-shirt, and black shorts.

Sensing life was about to give me a message, I paused for a quick chat with her.

“Well until recently, he was 80% deaf in one ear and 40% deaf in the other. He’s got a hearing aid now. Get this – we were driving in the car the other day and he started whingeing, saying he hated the noise. What noise, I said. Turns out it was the wind through the bloody half-opened window!”

‘’Yeah it is! I told him though – you’re going to have to learn to selectively filter stuff out, you are! You know what he said then? You talk too loud. Ha! Me, talk too loud?Well and who’s to blame for that, I said to him!’’

‘’That’s funny! At least he wasn’t complaining that you talk too much,’’ I winked.

We said our goodbyes and I watched her stride off, popping her earphones back into her ears as she went.

From what I could see, she and her husband each had a point.

Some things in life can just sound really noisy to us when we hear them for what they are.

And selective filtering out of certain noises is something we maybe don’t do enough of.

Maybe lots of us talk too loud too – in our own heads, constant mind chatter toning out and dulling down our more instinctual and intuitive senses.

I took my conversation with the fellow walker as a nudge and wink from Life.

You see, not two days before, I’d participated in an impromptu womens sacred ritual, led by the aboriginal ancestors and their lineage, at a special site on country.

It had included spontaneous chanting and deep connection to the land and its energy, a profound experience and healing for the four of us involved.

When I got back home I decided to have a break from social media for a week or so.

I wanted to be quiet…and to quieten the usual clamour of my mind.

I wanted to open into the spaces I would normally fill with Facebook…and to invite those spaces to take up residence in my being.

I wanted to tune out…so that I could continue to tune in.

I even decided to stay away from the internet as much as I could too. For one week at least, I declared, I wouldn’t satisfy my curiosity about life by engaging with search terms, search engines, or their results.

As the days have passed, I have been enjoying an enhanced sense of Now.

And as of yesterday, I have finally returned to my beloved forest for some quallity drop-in time, renewing a commitment to make the trip here at least once a week. 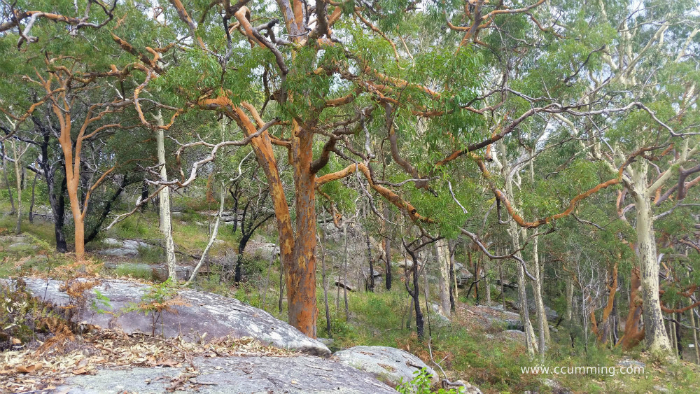 This time, guided by my senses, I lingered only at the edge of the forest.

I have no idea how long I leaned in close against the incredible girth of a red gum tree, my hands and forehead resting flat on the cool and mottled smoothness of its bark, and my nose pressed in to the nostalgic smell of pencil shavings.

At some point however, the relative silence was broken by the stirring of cicadas in the treetops.

All of a sudden, thousands of these insects launched into their song, and swiftly increased the volume to a dense cacophony of screaming pulses.

Impossible to hear my own thoughts, even if I had wanted to.

Grinning, I stood encircled by this aliveness, this thrum of electric chainsaws, this Mexican Wave bent on whole-brain balancing and on collectively raising the vibration.

A wave of palpable animation, moving through me, as me.

Dying down, and then cranking up again to a deafening crescendo.

Over and over, for ages and ages.

Impossible to hear and heed mind chatter, even if I had wanted to.

It really was perfect.

A most delicious din!

← a love letter to a stranger – would you ever consider it?
I’m a snorter…what about you? →