When faced with the unfamiliar in life, what do you do? Dismiss it and avoid it? Or lean into it? Tickling our tastebuds with the new is a great skill we can cultivate for opening more of our heart to life.

Take yesterday, for example. I created a quick and easy veggie snack plate for my lunch which included some of my favourite sauerkrauts and a new kid on the block: a bright pink probiotic dip made from fermented cashew nuts.

Now I’m sharing this with you because that dip gave me a great reminder about how we can often be in life when it comes to things that are unfamiliar!

I had never tried fermented cashew nuts in a dip before. For me, the idea was a bit ‘’out there’’.

I wasn’t at all sure I would like the taste but I had been on the lookout for new foods that I could add to my growing collection that boost gut health. And so it was that with a dash of bravado and a fair few dollops of uncertainty, I bought the dip

Back home, after appreciating all the beautiful colours I’d put together on my plate, I sat down to eat.

Being a creature of habit, the first thing I did with that plate was head straight for the thing I knew I loved – the leftover roast pumpkin.

Meanwhile, the pink sat there, untouched, as I savoured glistening golden flesh aplenty.

Swallowing my last mouthful of roasted heaven, my fork hovered over the pink for a fraction of second…only to opt for the beetroot kraut instead.

The pink looked on at me but I pretended I hadn’t seen it.

I closed my eyes as my taste buds exploded to the juicy intensity of summer sun.

When I reopened them, I could have sworn the mound of pink had grown taller.

I eyed it for a second or two, deep mistrust building, and was grateful for my fingers saving me at the last minute as they grabbed some walnuts for me to chomp on.

Dee-licious! So crispy! Definitely better than the other brand.

And then I had to smile at myself. Because I knew what was going on.

Ha! Caught in the act.

I really was putting a lot of energy into avoidance.

But I’m sure you can relate, right?

I mean, when faced with change and the new – even change and new  things that we ourselves instigate – there can still b.e that part of us dedicated to preserving the status quo, a part of us that can want to just go with what it knows. The familiar. The old way. The well-worn path.

Now that I had busted myself, there was nothing for it but to try some of the pink dip 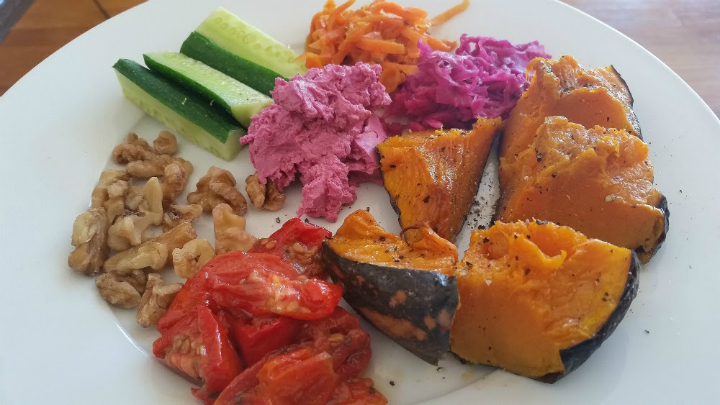 Well if you could have seen me you’d have thought I was a 6 month old being given peas for the first time. Right out the gate I decided I didn’t like it.

I went back to the pumpkin for some instant gratification, a soothing balm for my taste-buds shock.

But at the same time, I knew I hadn’t really given the pink stuff a fair go.

So I tried again – taking my time, and a cucumber stick as my ally

I decided to be really present to the taste of the dip, give it a chance to show itself more fully to me.

What I discovered was that it wasn’t exactly revolting. But it was just such an alientaste and a sort of fishy smell…not immediately delicious as I knew delicious to be. There were not even words to describe it. Definitely nothing like nuts.

I reminded myself this was how I’d once felt about sauerkraut. And yet now I love eating it.

So I took another stick of cucumber…and just hung in there with the pink stuff.

Sometimes, we really do need to give ourselves permission, space, and time, to lean into the new.

Bring a sense of openness and curiosity to it.

Hold a space for potential.

As far as the pink dip went, this meant me choosing to become ‘’interested’ in the flavour, let myself get to know it better, let it reveal its character to me more and more.

Leaning-in requires a softening, an allowing of what is so and of what is here, an accepting of something as it is.

Leaning-in softens the resistance, suspends the instant judgements and dismissals, and dilutes the tendency to want to compare something to something else more or less favourable.

Leaning-in is about a willingness to really give yourself, or someone else or something else, a chance.

Sometimes, it takes time for the new to grow on us. Leaning-in holds the space for that alchemy to happen.

Tickling our tastebuds is a great skill we can cultivate for opening more of our heart to life.

I won’t say I’m there yet, with that pink stuff, but it does at least get to live and see the rest of this week out in my fridge and on my plate.

As for my husband, he dove straight into his pink stuff when he came home that night – and he loved it! Go figure?! Maybe it was something to do with the beer that he was drinking at the same time! (also fermented!)

Invitation: When faced with the unfamiliar in life, what do you do? Dismiss it and avoid it? Or lean in?

This week, I also invite you to put one new food on your plate that you’re really not sure about – and practise ”leaning in”!

← how slow is my new go
being kinder to yourself – can you switch to this in the moment? →