You’re about to enjoy a little tale about the biggest tail I have ever swum behind, the fish it belonged to, and its cavernous mouth. It’s not business as usual at Notes From The Eagles Nest, because I am still on my sailing holiday and this is a prescheduled send I prepared for you before I left. So, sit back and enjoy a snippet of an amazing adventure that opened my heart in 2009, when I snorkelled with whalesharks in the stunning turquoise waters of Ningaloo Reef, Western Australia. Whalesharks are mysterious creatures, very little is known about them and their habits, and for most of the year they can be very tricky for humans to locate. But Ningaloo is one of the only places in the world whre they appear with some predicatbility at a certain time of the year, in large numbers, and in near-shore waters. On our day, we managed to get more than lucky…..

The boat lurches forward, taking us in one second from tranquillity and cruising to tearing full speed ahead, the whining of the now cranked-up engine deafening us. Cold, salty spray hits our faces as we all race to the side of the boat, lean over, and crane our necks to see where we are headed and what’s going on. Two other boats power in the same direction, the three of us converging in a bid to be first to arrive. A sure sign the plane has made a spotting.

My heart pounds its way into my throat as I fumble about at my feet, messages conflicting in my brain to freeze and to get ready.

This is GAME ON.

I step down onto the marlin board at the back of the boat, ready for entry. Bile scorches as it comes up into my throat. I am not a natural in the water. The swell laps the ocean over my fins. Face mask digs into my skin. Panting, I bite down hard on the snorkel mouthpiece. My knees are knocking for England and Australia, the walking split my least preferred way of getting into the water.

Hammering in my head is the realisation I am about to come face to face with the most colossal thing I have ever seen in the ocean.

What if a tigershark comes?

What if I miss the whaleshark?’

No more time for thinking. Off goes the wail of the claxon-horn, penetrating space with its vibration.

‘’Group 1! WE’RE GAHHHHIN IN!” he yells, his Australian accent so broad I almost miss the instruction that we are about to unleash into the water.

For a horrible second or two I am submerged in warmth and cold, scrabbling with hands and fins in order to surface and lose the volume of bubbles blurring my vision.

My head bobs up.

There. Her arm in the air as directed.

Waves slap at me and I hold my breath, forgetting that’s wrong. I swim over to our leader, arriving with the jaggedness of exhales that need to slow down. But there’s no time and only enough time to see our dive master pointing downwards in the air with her finger, motioning us to look now and I duck under just in time to come face to face with…

…an open cave…passing through the water towards me. 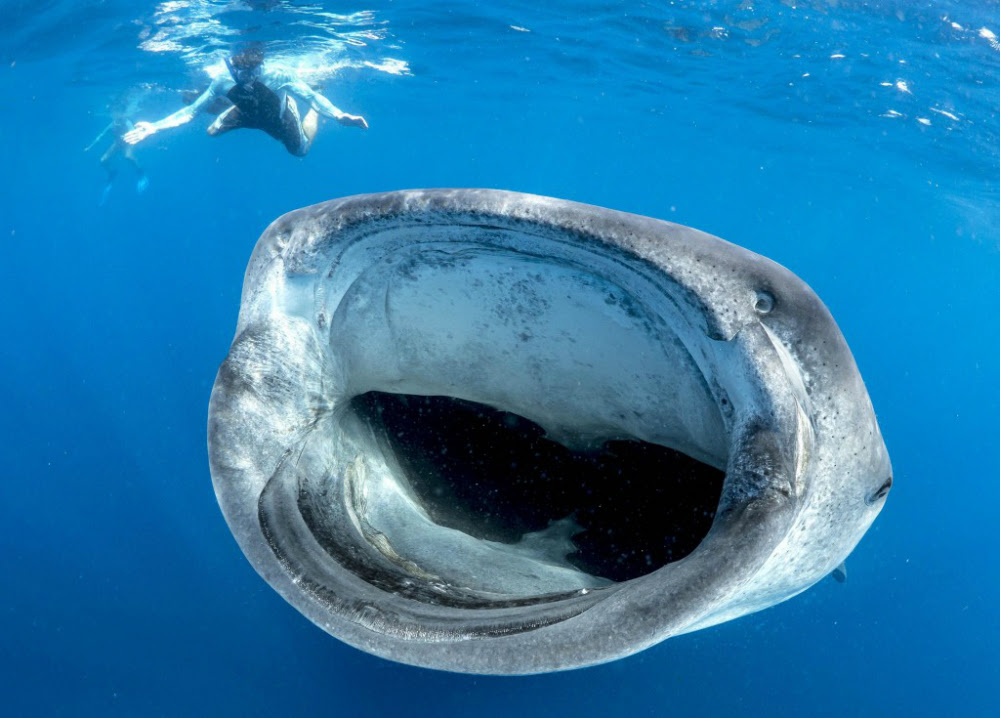 I hear my muffled screech, sending a torrent of bubbles in front of me. Eyes popping, I steer in haste to get out of the whaleshark’s way.

Then, seconds of just treading water, gawping ahead into the void that is this whaleshark’s 500 metre wide mouth.

The magnificence doesn’t seem real and I can’t take it in.

I linger a fraction too long and before I know it, two thirds of its 4m grey and spotted mass has glided past me. I am forced to play the failed game of catch up until, gasping, I resort to treading water and waiting for the boat to collect me.

The second time back in the water comes just minutes later, once the scout in the water confirms that the fish in question has spots and not stripes. This is of course good to know, since stripes mean it would be a tigershark that eats people.

I swim to the dive master quicker, am near the head of a 7m whaleshark from the word go, and remain there for the thrill of a swim that goes on for ten minutes. It takes all my power to kick my fins as fast as I can, but so worth it for the privilege of being alongside the gentleness of this gigantic fish that, for its part, is just cruising. I keep to the required distance, breathing in awe and breathing out wonder, and marvelling at ythis fish with its spots, its grey, and its grace. Tears mist me up.

To be beside such beauty! To be permitted to share in just a slice of its journey!

Finally, the fish descends, slipping away from me down into the deep to be claimed by the murk.

The vastness of ocean all around me.

And I am surprised to hear a sob come out of me.

Back on the boat, there’s barely any turnaround time between groups before the horn wails again, my group is called, and I am plunging back into the ocean. We swim with another 4m whale shark and I choose to snorkel at the rear, captivated by the magic and power of its sashaying tail until this whaleshark too, is lost to the void below.

I could tell you so much more.

About the flying manta ray we go on to dance with in joy.

The Red Bell Jellyfish that freak me out, are everywhere, and to be avoided on account of their sting.

Or indeed the sea snake I spot on the surface from up in the Captain’s wheelhouse – one of the most venomous snakes in the world.

But on this day my open heart and sense of true adventure belongs to the largest fish in the world!

← The Thrill Of The Reveal: Kakadu By Night
When Did A ”First Time” Last Breathe Life Into You? →